Before it ever got started, the so-called inaugural Latin American and Caribbean League Tournament proved to be something of a promotional and public relations disaster. And before it was over, the make-shift event nearly turned into an on-the-field embarrassment of gigantic proportions for the defending world champion Cuban national team. But after a much-delayed but nonetheless exciting week of spirited play, the Cubans reigned once more as expected champions of still another international baseball spectacle. And the Venezuelan national team, for its own part, saved some face for local organizers by proving to be a sharp thorn in the side of the heavily favored Cuban nine, and also by demonstrating that they might well be capable of a few surprises of their own in the upcoming November Taipei World Cup matches. 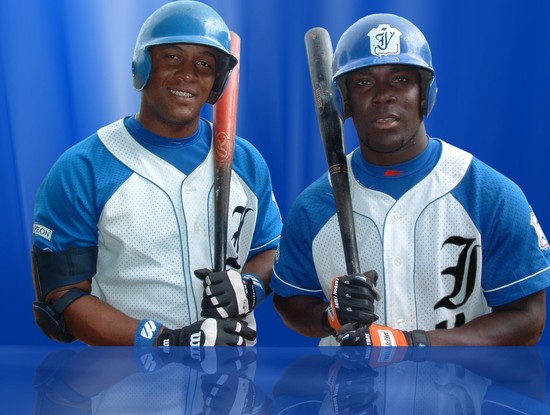 The tournament itself was surrounded by a dense cloud of mystery and an avalanche of disorganization. Initially it was announced as a showcase seven-team round robin match (including Panama, the Dominican Republic, Puerto Rico and Nicaragua among the eventual no-shows). Action was scheduled to open on October 2 and was billed as a possible long-term replacement for the traditional (but now troubled) professional winter league playoffs known as the Caribbean Series. It eventually sputtered open on October 10-11 as a much reduced three-team "friendship series" with only weak-sister Colombia joining the Cubans and the host-nation Venezuelans. Initially it was billed as I Liga Latinoamericana y Caribena de Beisbol (First Latin American and Caribbean League), then simply called the Primera Liga del ALBA (First ALBA League) in an embarrassed recognition of its reduced status. There was no website for the event (remarkable in today’s cyber world), and once play began in stadiums in Caracas and nearby Maracay (the original site was supposed to be the city of Valencia) there was little press coverage and almost nothing reaching the outside world in the way of box scores, pitching match-ups, or even game summaries. Even the Cubans (who give such prominence to the games of the cherished national team) had to work exceedingly hard just to follow this under-promoted spectacle.

The much-troubled and over-hyped "tournament" eventually opened inauspiciously to little fanfare, with Venezuela coasting past Colombia 6-1 in caracas on Wednesday (October 10), and Cuba drubbing the Colombians 9-0 a day later, via a rain-shortened three-pitcher no hitter. Cuba’s pitchers for the initial whitewash game were Elier Sanchez (who opened and hurled three frames), Jonder Martinez (two innings), and southpaw Norberto Gonzalez (who breezed through the final inning). The absence of electric lights at the Maracay Stadium combined with the rain to bring an early amd merciful end to the proceedings. Cuba’s offense was paced by Ariel pestano (two hits, a double, and three RBI) and Yoandry Urgelles (who also contributed three runs-batted-home and an additional two-bagger). All seemed to be unfolding just about as expected when Cuba pounded Venezuela 10-3 in Caracas’s Jose casanova Stadium on Day Three, mainly on the strength of a Pestano homer in the fifth, followed by a five-run game-deciding eighth-inning uprising. The heavy hitting compensated for a shaky outing by veteran lefty Adiel Palma, whose lack of control permitted an early Venezuelan 3-2 lead after only three frames. Cuba’s bullpen-by-committee (Yunieski Maya, Arley Sanchez, Pedro Lazo and Jose Garcia) held Venezuelan hitting at bay after the early frames.

But things seemed to unravel for some surprisingly porous Cuban pitching over the next several days, resulting in a pair of shocking losses at the hands of the highly motivated Venezuelans. The sudden Cuban setbacks seemed to put the hosts on the doorstep of a remarkable tournament upset. The initial Venezuelan victory on Sunday (October 13) was a 7-2 drubbing keyed by Manuel Ramirez, who slugged a solo homer that opened the scoring in the second, then later contributed a two-run single in the fourth. National team rookie right-hander Vladimir Banos (Pinar del Rio) opened on the hill for Team Cuba, but the loss was suffered by replacement lefty Yulieski Gonzalez, the bullpen hero of the August Rotterdam tournament. A pair of Habana Province hurlers, Jonder Martinez and Jose garcia, also worked late-inning relief, and a two-run shot by Yoandry Urgelles provided the only two tallies for the losers. Venezuela again surprised the Cubans a day later by a comfortable 5-1 count, this time mainly on the strength of a Sal Torres homer stroked off a delivery from closer Pedro Lazo. Not only had the Cuban pitching gone quite sour, but in this second defeat the normally potent Red Machine lineup managed only four largely harmless base hits against right-hander Marcos Castillo. Had anyone been following these games from USA Baseball (the USA national team)–but most likely they were not–they had to be smiling, with the Cubans suddenly looking anything but invincible in front of a Venezuelan club that also notably handed the Americans their only setback in last summer’s IBAF Americas Region Pre-Olympic Tournament in Havana.

If history was any predictor (and in international baseball, "history" almost always means dominance by the usually invincible Cubans) the final match-up should not have been much of a contest, and in the end it certainly wasn’t. With their pride seemingly a bit wounded, the rey Anglada-managed nine rolled over their opponents on Wednesday evening by a 9-1 coount that didn’t tell the whole story. Venezuelan bats were shut down effectively by opener Elier Sanchez (three innings) and reliever Jonder Martinez (four innings). Pedro Lazo permitted his second homer of the week in the eighth (this time to Denis Torres) but that was only enough to ruin the shutout. The offensive charge for the revived Cuban forces was led by new national team second baseman Hector Olivera (with a solo homer in the fifth) and slugging first sacker Alex Mayeta (with a game-busting grand slam in the sixth. Much of the damage came against reliever Beiker Gratol, who pitched briefly in the majors (1999) with the Detroit Tigers. The lopsided game might have been even more one-sided had it not been for several questionable umpiring decisions (as reported by Havana’s Radio Rebelde in its inning-by-inning updates on the game from Caracas), missed calls on an outfield catch (that wasn’t) and a home-plate tag-out (that wasn’t) that definitely robbed the Cubans of of a handful of additional tallies. In post-game ceremonies the honored top players were Venezuela’s Manuel Ramirez (with two homers in the event) and Cuba’s Yoandry Urgelles (who stole six bases and also contributed one of Cuba’s four total long balls).

After a week of Caracas-based tune-ups for the Taipei World Cup (which opens November 6), a pair of intriguing questions now remain very much open. Were the two Cuban losses a mere aberration (part and parcel of a sport in which the Cuban winning skein featuring a nearly 90% success rate seems to defy all baseball logic?), or was this a needed wakeup call for a defending world champion Cuban club that may well have its hands full with the American, Dutch, and Japanese challengers at World Cup XXXVII? Also, will future editions of this disappointing inaugural ALBA tournament show enough improvement (especially in organization and scheduling) to become the important date on the international baseball calendar that it was originally announced to be? It does seem more likely that the Cuban national team will get its act together far more easily next month in Taiwan than the Venezuelan Baseball Federation will by next summer in Caracas. I am not willing to bet, at this point, that the Liga del ALBA will have a very bright immediate future in the over-crowded field of Olympic-style international events. But I would certainly still put my money on the Cubans next month in Taipei. The Cubans are uncanny when it comes to always winning big-time when the chips are down (as last night in Caracas). Cuban national teams have now reached the finals in every major international tournament they have entered since 1959; this string now numbers 48 events and includes the Olympics, MLB World Baseball Classic, World Cup, Intercontinental Cup and Pan American Games. In the World Cup alone the defending champions will be shooting for their tenth straight title dating back to 1984 (when the event was still called the Amateur World Series). This is a recorded unparalleled in the history of baseball or any other sport for that matter. In short, everyone should be prepared for those remarkable records to once more be extended in Asia newxt month. It seems like only one team can beat Team Cuba, and that is Team Cuba itself.