We’re number two! We’re number two! We’re number two! Its the refrain resounding from sea to shining sea as the USA has managed to hold on to its runner-up slot in the latest International Baseball Federation world rankings of the globe’s 72 ballplaying nations. Not bad for a FOOTBALL NATION. And what country ranks number one in football? Last time I looked it was Brasil, I think, or was that Argentina, or perhaps Italy, or maybe Spain, or perhaps even the The Netherlands. By the way, in case you weren’t looking, it was that other FOOTBALL NATION of The Netherlands that just captured the recent World Cup Baseball tournament in Panama during mid-October. (Team USA with a Triple AAA All-Star squad tied for third with Team Canada). 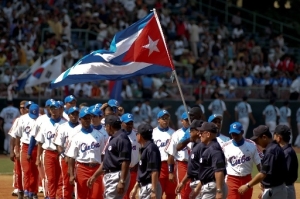 With yet another silver medal finish at the Panama Baseball World Cup this October, Cuba maintains its previous number one IBAF world baseball ranking.