Cuban centenarian Conrado Marrero’s larger-than-life pitching legend was always somewhat grander than his raw numbers, at least in the stateside majors if not back in his native Havana. Arriving in the big time with the Washington Senators at the hoary age of 39, Marrero won only precisely that many games (39-40 for five seasons) as a junk-ball throwing American Leaguer.

His greatest achievements back on his native island came in the late-1930s and eary-40’s on amateur diamonds, where adulation was considerable but where true stardom was obscured by the glare of the more popular professional game. But statistics alone never prevented Marrero from becoming one of the most colorful characters among the handful of early mid-century Latin American big-league imports.

Yet like the finest Cuban rums Marrero has only ripped with age. The Cuban idol has received much attention in recent months both at home and abroad. Part of this renewed limelight has been a result of mere longevity. Marrero crossed the century mark last April and is now the oldest surviving major league alumnus. But part of the newfound celebrity has been caused by his current plight in his native Cuba, where he has chosen to live out his life loyal to Fidel Castro’s communist revolution.

Marrero is now blind and homebound in the third-floor apartment he shares with the family of grandson and caretaker Rogelio. The post-Soviet economic downturn that has brought hardship to most Cubans has left the Marrero clan with a mere subsistence lifestyle. And a recent fall and broken hip has meant additional strain on sparse resources of a $125-month government stipend. But the Marrero saga has now taken a major turn for the better. MLB’s Players Association has finally classified Marrero among a group of needy pre-1980 players who don’t qualify for standard pensions but deserve to be compensated nonetheless. The result will finally be the long overdue and considerable MLB financial compensation so desperately needed.

MLB’s settlement – the first of two $10,000 stipends was released only this week by the U.S. Treasury Department’s Office of Foreign Assets in Washington – also now brings to conclusion a lengthy battle on Marrero’s behalf by Canadian Kit Krieger. Krieger befriended the Marrero family a decade ago and has personally waged a persistent campaign to tease compensation out of the Baseball Assistance Team (BAT). That personal battle on Marrero’s behalf has now apparently come to a happy end.

A related version of this story was published recently in the New York Times (on-line version on Friday, February 24, 2012).  The link to the NYT version of the Marrero pension story is http://bats.blogs.nytimes.com/2012/02/24/centenarian-in-need-receives-overdue-aid/?ref=baseball 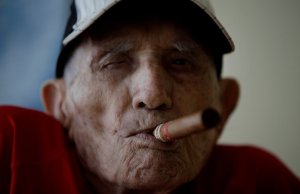