My recent reminiscences (on my Facebook page) regarding the remarkable 1952 season of the recently deceased Virgil “Fire” Trucks drew some interesting responses that perhaps merit repeating here (for those of you who don’t follow me on Facebook). One of my childhood favorites, Trucks pitched a pair of no-hit, no-run games for the Detroit Tigers during the 1952 American League season; the first came on May 15 versus the Washington Senators and the second on August 25 against the New York Yankees (both by 1-0 scores). The truly remarkable feat here is that the Detroit Tigers managed to lose 104 games that season and Trucks posted a mere 5-19 record for the campaign. This raises the intriguing question: what other pitcher in baseball history (chose your league and era) can boast 40% of his season’s victories as no-hit masterpieces? 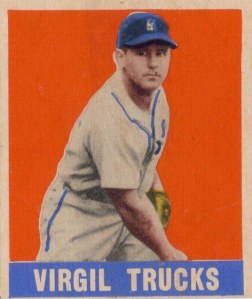 Moving on to only slightly greener pastures the following season (splitting the year between the St. Louis Browns and the Chicago White Sox), Trucks posted a 20-10 mark and finished fifth in the league’s MVP balloting. Thus we have a double whammy of true oddities. In 1952 Fire Trucks became only the third pitcher in MLB history to claim two no-hitters in the same campaign (preceded by Johnny Vander Meer and Allie Reynolds); there has since been one more to join the club (Nolan Ryan in 1973). Jim Maloney of Cincinnati also tossed a pair of masterpieces in 1965 but both were extra-inning affairs and one was a loss in which he surrendered a home run in the eleventh frame; by current MLB rules that first game was not therefore “officially” a No-No. Roy Halladay also authored a pair of gems in 2010 with the Philadelphia Phillies but one was a post-season affair. The second oddity for Trucks was that in 1953 he became one of the very few hurlers ever traded in the middle of a 20-win season.

The 40% No-No’s/wins ratio of Virgil Trucks was nearly matched only one season later by St. Louis Browns teammate Bobo Holloman, who managed to reach perfection in his first-ever big league start (May 6, 1953 versus the Philadelphia Athletics). Holloman lasted a single season in the “Bigs” and won but three total games. His ratio is therefore 33% and it perhaps tops Trucks only in the sense that his tally was one No-No versus three victories for an entire big league career. 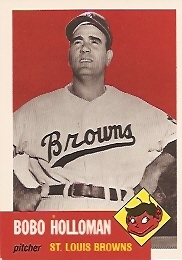 But when it comes to such oddities we repeatedly have to turn to the post-1962 Cuban League. There in 1966 right-hander Aquino Abreu (laboring for the Centrales ball club) matched Johnny Vander Meer with consecutive gems in January 16 and January 25. Abreu actually did Vander Meer one better since in the outing immediately preceding his two gems he authored a 20-inning complete game (which he actually managed to lose, but only after 19.1 innings of unparalleled shutout hurling). No big leaguers has ever tossed 19-plus scoreless inning in a single game. And Abreu also outstripped both Trucks and Holloman since his record for that 1966 season (his team played only 63 games) was a mere 3-2. For Abreu that year his no-hitters comprised 66% of his total victories!

For the complete story of Aquino Abreu – one of baseball’s most remarkable unknown figures – the reader can turn to my SABR Biography Project essay found on-line at: http://mlb.mlb.com/cutfour/#contentId=43280748

And then there is one more interesting footnote to the Virgil Trucks saga – this one more directly related to his passing earlier this week at the remarkable age of 95. In an essay recently posted on MLB.com, historian Chris Jaffe is quoted as pointing out that the single remaining living ball player (now that Trucks is gone) to “play” against the Chicago Cubs in a World Series is 89-year old former Tigers outfielder Ed Mierkowicz. The point of Jaffe’s observation (http://mlb.mlb.com/cutfour/#contentId=43280748) is of course to yet again underscore the “dead horse” involving the length of time since the last Fall Classic staged in Chicago’s North End.

And the observation is correct enough, but only because of a semantic technicality involving the verb “played”. There was another still-very-much-alive member of that 1945 Detroit Tigers World Series entrant who was indeed on the club’s active World Series roster; unfortunately, however, he never made it out of the bull pen and into the Detroit lineup. The great irony here is that this other player was 18-year-old rookie phenomenon Billy Pierce, who would eventually make three appearances the next time the Windy City hosted a World Series in 1959 (of course with the Go-Go White Sox and not the downtrodden Cubbies).